In 2014, mobile queries within Google Search surpassed desktop searches for the first time in Internet history. Mobile users on average spend more time per day on their device than desktop users, and there are no signs of those numbers reversing course.  A large portion of these mobile users are on smartphone devices that have full-internet browsing capabilities.

Luckily for you, marketers are still lagging behind consumers in catching onto this trend. There’s still plenty of opportunity to capture big ROI using various publishers targeting mobile users. We will go over four ways to capture this opportunity, with some basic setup and tips.

Make your search exclusive to mobile

Bid Modifiers – Back in 2013, Enhanced Campaigns introduced a feature called Bid Modifiers. You can use Bid Modifiers to focus your campaign on mobile traffic by setting a Max CPC low enough to rarely show on Desktop while boosting the Mobile Bid Modifier by +300% to place your term high enough in the auction. (Example of traffic from Swappable) 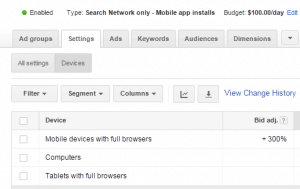 This option can be set within the ‘Settings’ tab of your AdWords account by selecting the ‘Devices’ setting.

Mobile-Preferred Ads – Another thing you can do to focus your campaign towards mobile traffic is to create ‘Mobile Preferred’ ad copy. These mobile-preferred ads will be given preference by Google over ads of the same type. Note, however, that this does not prevent Google from generating impressions on Desktop or Tablets if your particular ad group contains mobile-preferred ads only.

Tracking Mobile App Installs – Mobile app installations are able to be tracked within the AdWords UI for Android without implementing code in the app. For iOS, the setup is slightly more complicated, and using a 3rd-party tracking service such as Adjust or Apsalar is recommended. A walkthrough of setting up tracking for iOS for AdWords is located here.

Alex Beals joined 3Q Digital in October of 2013 after working for several startups in New York’s version of “Silicon Alley,” including Squarespace and Lifebooker. Alex is an avid snowboarder, golfer, and loves exploring San Diego on a bike.