If you like SEMpdx (and lets face it, who doesn’t?) then you may have tried to tell the world, by sharing or liking something at our domain on Facebook.

This was the case for me early yesterday morning,  when I tried to Like the interview with Joanna Lord, and saw a bizarre error, telling me that “You like 404 Not Found.”. WTF? 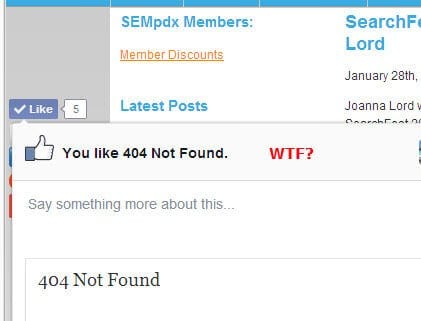 I did a quick search on Google, for “You like 404 Not Found” and saw that there was only one result, and that was at a companies 404 page, where they suggest that maybe I had found their error page because “you like 404 not found pages”.  Funny, but not helpful.

In reality, this 404 error wasn’t the only problem we’d been having with Facebook, and for a few months now, when we shared a link, more often than not the post would appear with no thumbnail image, and now the problem had somehow escalated! 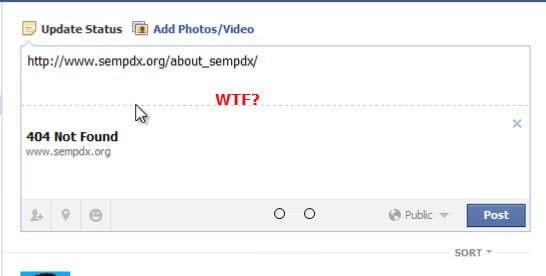 When the missing image problem was first noticed last year,  both myself and my programmer did try to troubleshoot it, including turning off all plug-ins and changing the WordPress theme, etc. but we both finally determined that it was not a problem inside WordPress all, and we  never did come back and solve the problem.

Now,  things had escalated, and even the facebook debugging tool  was showing that our entire domain was a 404 error! 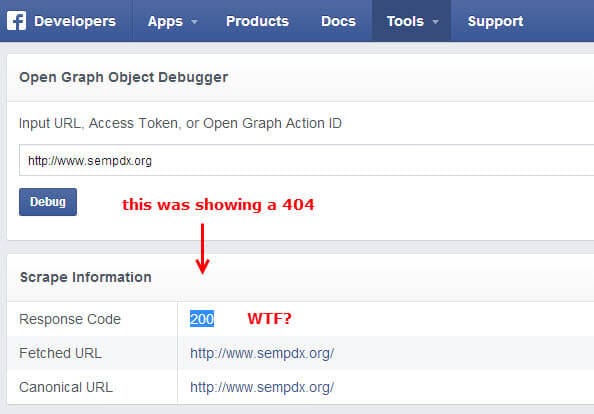 Must be a server problem, right?

We assumed that the missing image problem was some issue with our domain / hosting, so I asked my admin to look into it around Thanksgiving. He did, but couldn’t really find anything, and it really wan’t that big a deal, so it went on the back burner – that is –  until last month’s board meeting, where we all agreed that we needed to get images working on our shared Facebook links.

As the person in charge of the website, it was embarrassing to me, so I committed to having it fixed, but it wan’t until yesterday mornings 404 fiasco that we really dug in.

Just yesterday, between three of us, we had nearly a dozen hours into it,  trying this and that, before I decided that it HAD to be a server problem. There MUST be an issue with how the domain was set up on our server, so I contacted my server admin again, and he agreed to look into it further.

We Fixed it by Disabling IPv6

You see, the problem turned out to be that our registrar for SEMpdx.org is Dotster, and they do not fully support ipV6 yet, even though our hosting server does.  IPv6 is the latest revision of the Internet Protocol, the communications protocol that provides an identification and location system for computers on networks and routes traffic across the Internet, and its already been around for years.

Our admin Charlie was able to determine that when Facebook first checks a given URL, it looks for an IPv6 address, and if one is delivered, then great, but if not, it moves on to look for a traditional IP address, IPv4.

Since our server was delivering an IPv6 address just fine, Facebook had no reason to look any further, so the fact that it was resolving wit ha 404 after connecting with Dotster was irrelevant.

I personally want to give a big thank you to Heather, my programmer who spent the better part of the day troubleshooting and trying different suggestions and solutions, and Charlie at Weberz hosting, who finally figured this all out last night after I tried to blame it on him.   I also personally want to send a big “Shame on you” to Dotster for wasting our time.

Sure we know (now) that Dotster can manually add the necessary AAAA records if we were to submit a support ticket and tell you we need them in the first place, but other registrars do that automatically, and have for some time.

Scott Hendison is the CEO of Search Commander, Inc. and a recovering affiliate marketer. He is also one of the founding board members of SEMpdx. Find out more about him at his website, SearchCommander.com.

The Future of Digital Marketing 2022 Edition: A Panel Event with SEMpdx