For the third year in a row, I’ve had the opportunity to attend the Digital Summit in Portland. This is my second appearance as a guest presenter, but I’ve elected to attend as many sessions as possible and share insights and thoughts with my SEMpdx peeps. My goal is to share the best highlights over the 2-day conference, for those that couldn’t make it or were too lazy to take their own notes. Enjoy and feel free to share your thoughts in the comments section below.
For attendees with a VIP pass (like yours truly and other members of the Anvil team), the Digital Summit kicked off with 3-hour workshops. We decided to divide and conquer the 2-day conference, including the morning workshops. I elected to attend How to Hack Facebook’s Algorithm Changes, hosted by Carlos Gil of Gil Media Co. He shared a host of nuggets to help brands increase reach and engagement. I live tweeted my favorite insights at @KentjLewis and used the #dspdx hashtag throughout the conference. I elected not to provide a full recap of the VIP-only workshop, however. The one tip I didn’t tweet: leverage Facebook notes to game the algorithm. Think blogging for Facebook.

What Brands Need to Know About Amazon Alexa and Building for Voice, Noelle LaCharite, Microsoft
Noelle has a very unique perspective on smart speakers and voice search, as she is part of the Cortana team at Microsoft and formerly worked on the Amazon Alexa team. Per personal life also played a role in her career, as her son has Down Syndrome and her father suffered serious injuries in an auto accident. Before going into the specifics of voice, she reminded the audience that a great deal of responsibility comes with the power that artificial intelligence and machine learning brings to the game.

She started off her conversation talking about integrating voice into our lives, including appliances. Specifically, she mentioned working with Whirlpool to integrate voice into the hardware, so you can command your oven to turn on, or have your smart fridge tell you when it’s time to restock specific products. Voice is everywhere and growing. According to research, voice is powerful, with an expected 1.83 billion users by 2021. Currently 30% of interaction 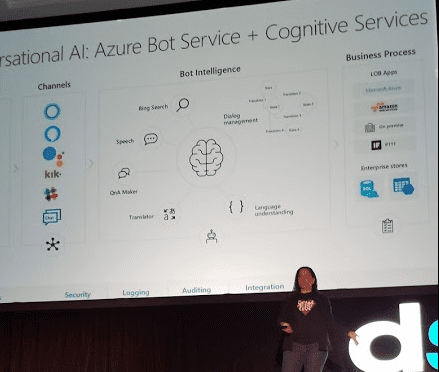 s with technology will be through conversations with smart machines, with 45 million homes driving $12 billion in annual revenue.

Brands like CapitalOne, fitbit, Uber, Purina, BMW, PGA, Nest, CNN and Expedia have extensive Alexa Skills built out for Amazon voice products. Noelle has built 1,000 Alexa Skills personally, with over 1 million users, including Daily Kindness and Daily Affirmation. None of her skills require more than 200 lines of code and all code is available for free on GitHub. She learned the hard way that the name of the skill needs to map to the invocation (official name). While she stumbled across the concept of ‘daily’ skills, it’s become a very effective way to create and retain engaged users.

The remainder of the presentation covered details on how to build and maintain an Alexa Skill or Azure ChatBots, which is too technical for me to cover, unfortunately. The below images will help illustrate the voice technology, tools, process and capabilities, however:

Break The Rules: How Brave Brands Are Challenging The Status Quo, Nicola Smith, REBEL & REASON
In this session, Nicola shares her thoughts on creating a rebel brand. By definition, rebel brands combine bold ambition with significant constraints. One way to define rebel brands is to start with rule followers, which she exemplified as Microsoft, Walmart, Ford and United Airlines.

The then shared those that are rule breakers, including REI, Zappos, Lyft, Netflix, Nike and Dyson. The key differentiator is that they constantly reinvent at all levels, from culture to products to marketing.
Here are a few criteria for rebel brands:
• See things others don’t see: think Apple and thinking differently
• Bravely lead with their beliefs: even if they’re unpopular (aka Nike ad campaigns)
• Slay monsters: tackling an issue much bigger than themselves.
• Strategically break conventions: smart and creatively
• Sacrifice ruthlessly: making decisions at all costs

All rebel brands need a Lighthouse Identity. The identity is projected insistently and consistently. It takes a stand and expects others to navigate by believes, actions and visions of the future. The Lighthouse is a north star that guides the development of the brand and the business and it is rooted in immutable truths about the brands past, present and future. 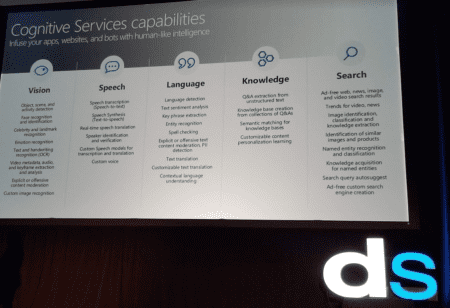 The Rebel Brand principles include: Intelligent naivety, Build a lighthouse identity, Assume thought leadership, Create symbols of re-evaluation, Sacrifice and overcommit, Enter the cultural conversation and Become ideas-centered. One great example is Dollar Shave Club, who identified an opportunity within the marketplace. The key takeaways for brands from Dollar Shave example: redefine and reinvent existing industries, look outside to differentiate and don’t follow the leader.

Another example: Lenovo ThinkPad focus on durability in extreme conditions, which opened up an entirely new market. Tips: know the markets you serve, redefine the value proposition and zig when the competition zags. Key lessons from Lenovo: look for new lines of business, expanding into new markets with product lines that leverage your expertise, infrastructure, talent or existing customers.

REI was another example of a rebel brand, when they announced closing on Black Friday. They are now on their fourth year of the program. They also launched the Give Back Box to get rid of products you no longer want or wear. These programs are also built with their manufacturer and community ecosystem of partners who think the same way. Lessons: build on your brand heritage, keep your values front-and-center and build your own brand neighborhood or ecosystem that share your values or that of your customers.

The last example is Volvo, who were constrained by the fragmented marketplace and a small marketing budget. Instead of using tough truck drivers to showcase the product, they used children instead. In fact, they had children drive their trucks via remote control and demonstrate how tough the trucks are, which appeals to the buyers and is consistent with the safe family message core to the brand. Takeaways: it effectively approached a niche market with a mass message to create a new niche. Nicola reminded us that conformity is the enemy and disruption is the opportunity.

UX Meets MBA: A Designer Goes to Business School, McLean Donnelly, The Makery Group
McLean is a designer that went to business school and shared his insights. He was blown away by the concept of the income statement. A world I’m all too familiar with, but for a graphic designer, this was groundbreaking. One insight he found early on, is identifying cost-savings as a revenue generation strategy (indirectly of course). As a designer, he was able to incorporate cost-savings thinking into product development.

He next looked to master metrics and build out calculators to justify certain designs. He used analytics to inform designs and justify decisions with management. He applied his learnings at Expedia after he completed his MBA and shared his experience. Specifically, he learned the margins on flights was low and the cost of the call center was high. He sat down with them and quickly learned international baggage fees are confusing and frustrating. The insights informed a transparent approach to UX in the redesign. The new site increased conversions and generated significant press.

McLean went on to cover other key lessons, including the importance of developing a strategy and implementation. His example was Shutterstock editor, which was a new service that didn’t previously exist in the marketplace. Takeaway: maybe business school isn’t a bad thing!

Lewis is currently Chief Marketing Officer for Deksia, where he is responsible for the overall strategic direction of marketing. After 22 years running Anvil Media, he sold to the Midwest systematic marketing agency. He is a co-founder of SEMpdx and its first President. He speaks internationally, writes for industry publications like SmartBrief and Portland Business Journal and has been an adjunct professor at Portland State University since 2000. He’s founded or co-founded four agencies and two organizations since 1999, including pdxMindShare. Lewis volunteers his time with SCORE, teaching a social media workshop and has been a board member, marketing committee chair and is a volunteer reader for SMART Reading. He’s been named a Top 40 Under 40, Marketer of the Year by AMA Oregon and a Top 100 Digital Marketing Influencer by BuzzSumo.

Tuesday May 9, 2023: AMA: Perspectives of a Dog-Eared CMO with Janet Lee Johnson