Often when people talk about negative SEO tactics, they’re talking about using extremely spammy links pointing to a competitor in an attempt to get the competitor’s page or site penalized. And yes, this actually happens…I have 2 clients in fact whose competitors apparently hired the same person to build spammy links to their sites (I could tell because both sites were getting links from the same set of link farms and crappy blogs, during the same month, despite being in different countries and different industries).

But my client, InstallAware, is seeing something a little more devious being done by their competitor. In their case, the competitor has found a post on a very strong, trusted forum (owned by Dell) where the post title questions whether their product is approved by Microsoft.

Here’s how it appears in the SERPs when you search for “InstallAware”:

The actual post, if you read it all, isn’t really so bad–a reasonable discussion follows and the net of the discussion is positive. Where the damage is done is in the SERPs themselves, where the title of the post becomes the page title and hence the headline that shows in the SERPs when you search for the product name, “InstallAware”. I’m not going to link to that post because that would just make our problem worse, of course.

So how do we know this is an attack, and not simply an example of a post in a really strong, trusted site ranking as it should given the domain authority, PageRank, etc.?

Here’s a small excerpt from the backlinks…I’ve fuzzed out some of the more explicit words in the domains and titles: 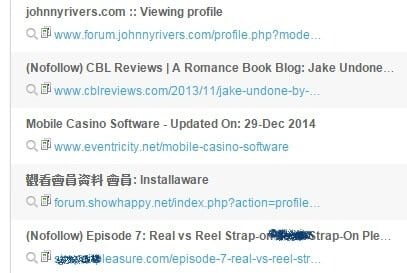 And here’s the blog comment spam, which conveniently has a typo in it, making it easier to find all instances of it via a Google search. Note that they’re using the target term (“installaware”) as the anchor text on the link to the post:

A large number of the comments trace back to a Google+ profile from India belonging to “Marie”, who apparently works at BlockBuster (yeah right).

Why does this work?

If you just created a new site to put a negative post on, or did the blog post on some other small site, it would be extremely hard to get that page to rank at all, let alone high on page one for the company’s own name. And, building a pile of spammy links like this wouldn’t really help, as those links would quickly get the page and/or site penalized.

But, starting with a page on a super strong trusted domain, with a ton of legitimate links to the domain, the additional spammy links to this particular page registers as such a low percentage of the overall link profile that the penalty isn’t likely to happen. So, those links work pretty much as well as they would have worked on any site 5 or so years ago, before the advent of manual and algorithmic penalties.

This is a bit of a perversion of a well-known positive SEO technique known as Barnacle SEO (a term coined by Will Scott), where you can point a bunch of links at your page on a site like Yelp to get that page to show on page 1.

The perpetrator in this case actually has an advantage over the positive Barnacle SEO practitioner, as he/she really has no risk of damage to themselves from using aggressive and nasty spammy link sources. Their OWN website is not involved at all, and it’s really impossible to trace the links back to the person who’s creating this.

So how do you combat this?

Removing the links from all the spammy sites is going to be pretty much impossible, as they’re on sites that are overwhelmed with other comment spam etc. Those webmasters already have a cleanup problem on a galactic scale–if they’re not cleaning spam comments and profiles up already, they’re unlikely to do all that work just because you asked nicely. In the case of the Google+ profile, you can report that to Google, but that’s not going to remove the links on all the blogs posted by them.

Before we proceed, it’s important to realize that while a super strong, trusted site like the one in question isn’t really likely to get penalized because of a few hundred crappy links to one page, where the risk really DOES lie is in having parasitic SEO practitioners discover that this particular site will not take action on this kind of tactic, and hence those people will start using the site as a host for similar attacks for their other clients. This COULD cause the overall percentage of backlinks from spammy sites to grow to where it does get the site penalized, especially if the parasitic SEO folks start using some of the more aggressive comment spam engines.

So, it’s really in the best interest of the webmaster of the trusted forum to nip this in the bud, save a possible penalty, and lessen the amount of IP address banning, cleanup, etc. they have to do going forwards.

Let’s look at your options for getting this off of page 1 of the SERPs, along with the issues and effort involved with each approach.

The simplest answer of course would be to see if you could get the post taken down. In this case, though, the actual post is a reasonable and semi-useful discussion that the forum administrator isn’t likely to want to just delete.

We can ask the webmaster to move the post to a new URL, updating links to the post within the forum, and NOT doing a 301 redirect from the old URL to the new URL. Now, all of those spammy links will point to a page that 404s, which eventually will cause Google to drop it from the index (although this can sometimes take a month or two). A better approach is to make that old URL return a 410 (HTTP response code meaning it’s gone permanently, vs. 404 which means it’s gone but possibly only temporarily).

Keep in mind, when you’re approaching a webmaster with a request like this, you’re asking a favor which is going to require some work on their part. Work that they’re not getting paid for, and that’s going to be getting in the way of whatever other projects are also on their plate. It behooves you to not only be respectful and non-accusatory in your request (after all, THEY didn’t cause the problem, it’s someone else abusing their site that’s the cause), but also do what you can to help them mitigate the effects of the spam on their site as well.

A CMS like WordPress makes this approach very simple. But others (like the one in question) make this sort of change very difficult and time-consuming.

This approach is probably the least effort for the webmaster, and there’s the benefit to them of removing the effects of the potentially toxic links as well.